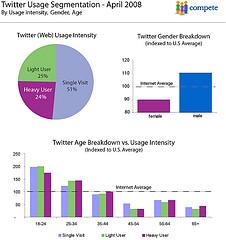 Thanks to social tools an event can go global! Jeff Jarvis said that MySpace has died. Are you agree? Do the stars of the 2.0 reduce Twitter and Facebook? No, the 2.0 is much more than platforms; It is a natural evolution of the Web, it is a concept, a philosophy. The user has evolved: from being passive, has become active, participatory. The 2.0 are the tools that allow us to work with the participation of users. To give you an example, 2.0 can be performed from any platform: networks you mention, a company’s own web, blogs there are a multitude of possibilities. Again Jeff Jarvis says that Twitter is, for now, question of adults, while young people flock to Facebook, is it possible to categorize your audience or target depending whether one and another? Segment not only by age but also by activity; 80% of Twitter users have a professional motivation and knowledge and information sharing. But is it in 140 characters possible? Yes.

The good thing about Twitter is that it allows us a brutal filter; through 140 characters people share what really interests him, especially at the professional level. Just a headline and a link around a conversation will generate. How does it work? It is very ductile; can be used to report an event, but also to give an opinion about what is happening there. The conversation takes on a global dimension overcoming physical barriers posed by the geographical location of the event itself. The event is virtual since then an event does not have to be face-to-face, because, in reality what is an event? It is an experience. In the same way that a flashmob is an event because it is an experience. The flashmobs are successful because people take part in the, but would be a spot or an advertisement on a fence, and not an event.